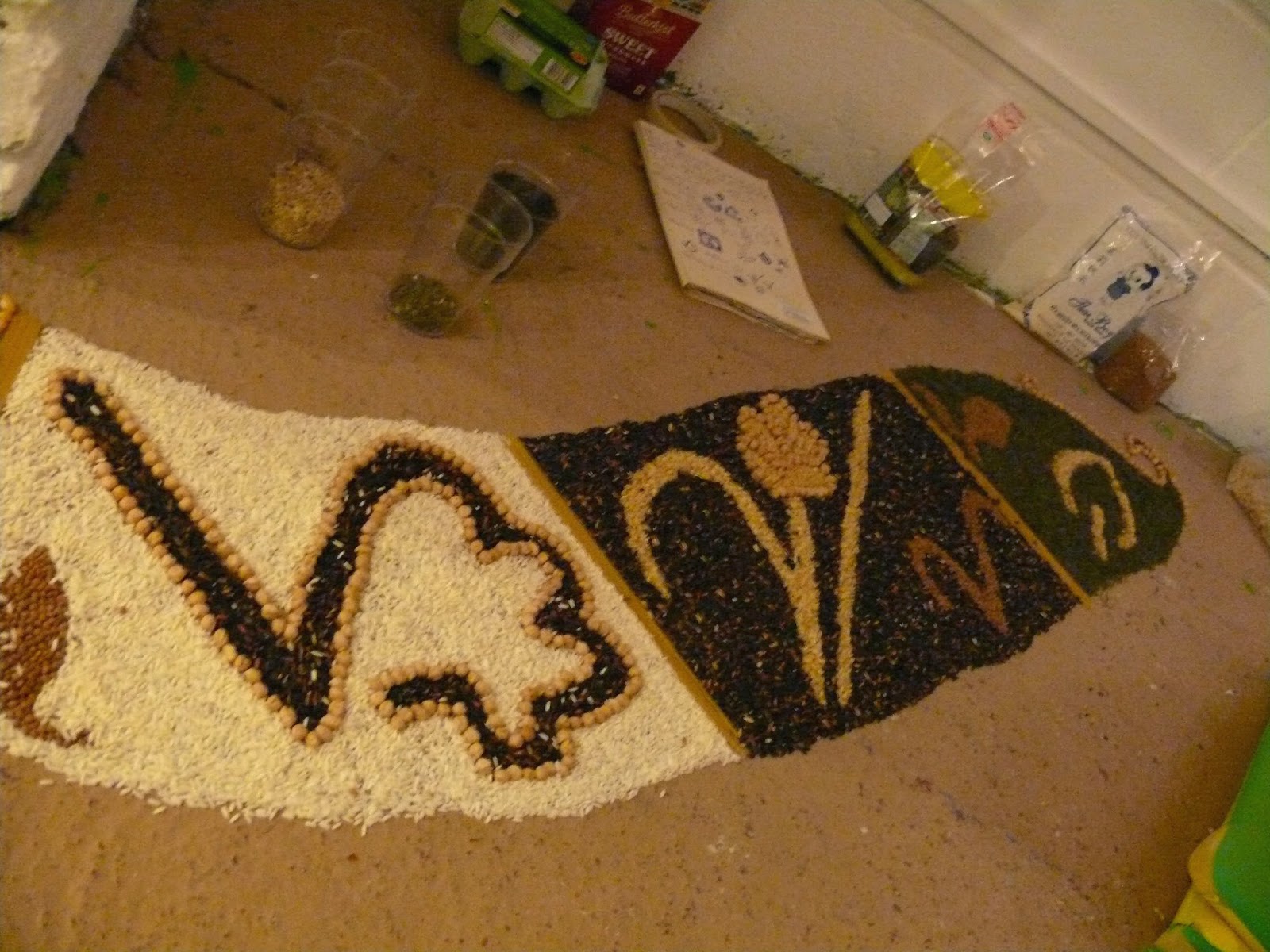 From the 31th of March till the 11th of April I had the great honor to participate in the Cambridge Sustainability Residency. After a week and a halve program, meeting different organization, hearing lectures and following workshops, we made an exhibition in two days time in which we shared our thoughts on Sustainability. In the exhibition with the nice title "Quid Pro Quo: Negotiating Futures", Latin for what for what or something for something, I ended up working with a theme I've been fascinated about for a long time now: Corpus Christi.

I already wanted to make a project inspired by the Corpus Christi procession for a long time now. However at first I didn't want to do something with it in Cambridge. When I was preparing for my stay (googling and reading about nice things to see in Cambridge) I came across the Corpus Christi College. I couldn't find a direct connection with the procession at first, so I put it out of my mind.

On monday the 31th of March I walked through the historical center of Cambridge and I noticed these bronze flowers in the pavement. Maybe they were a reference to the Corpus Christi processions with temporary carpets? The artist Michael Fairfax enjoyed the reference and he was surprised that he didn't hear of it before, but it was not his reason behind this work.

The seed was planted however, and while the program of the residency continued, it became clearer and clearer for me that there was a connection between Sustainability and Corpus Christi. Not in the meaning they represent, but in how you communicate a point of view and try to convince others that it is the right on. 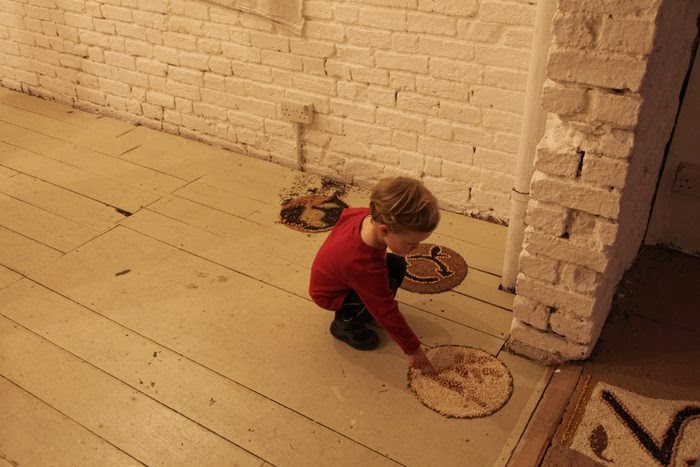 "Sustainocene - A postulated future period of over a billion years where policy and governance structures as well as science, technology and ethics, coordinate to achieve the social virtues of ecological sustainability and environmental integrity"
- from Wikipedia on the 2th of April


We were in luck with our residency that we had a curator among the participants. Vanessa Saraceno helped me a great deal. She came up with the plan to collected materials for the exhibition by knocking on peoples doors. In this way, the neighborhood got involved, could participate by giving materials and became a part of the exhibition. For me this was a great opportunity, not only is it a great, and direct way of 'Crowd funding', I also received materials I normally wouldn't choose for my ricecarpets like spaghetti or green tea. 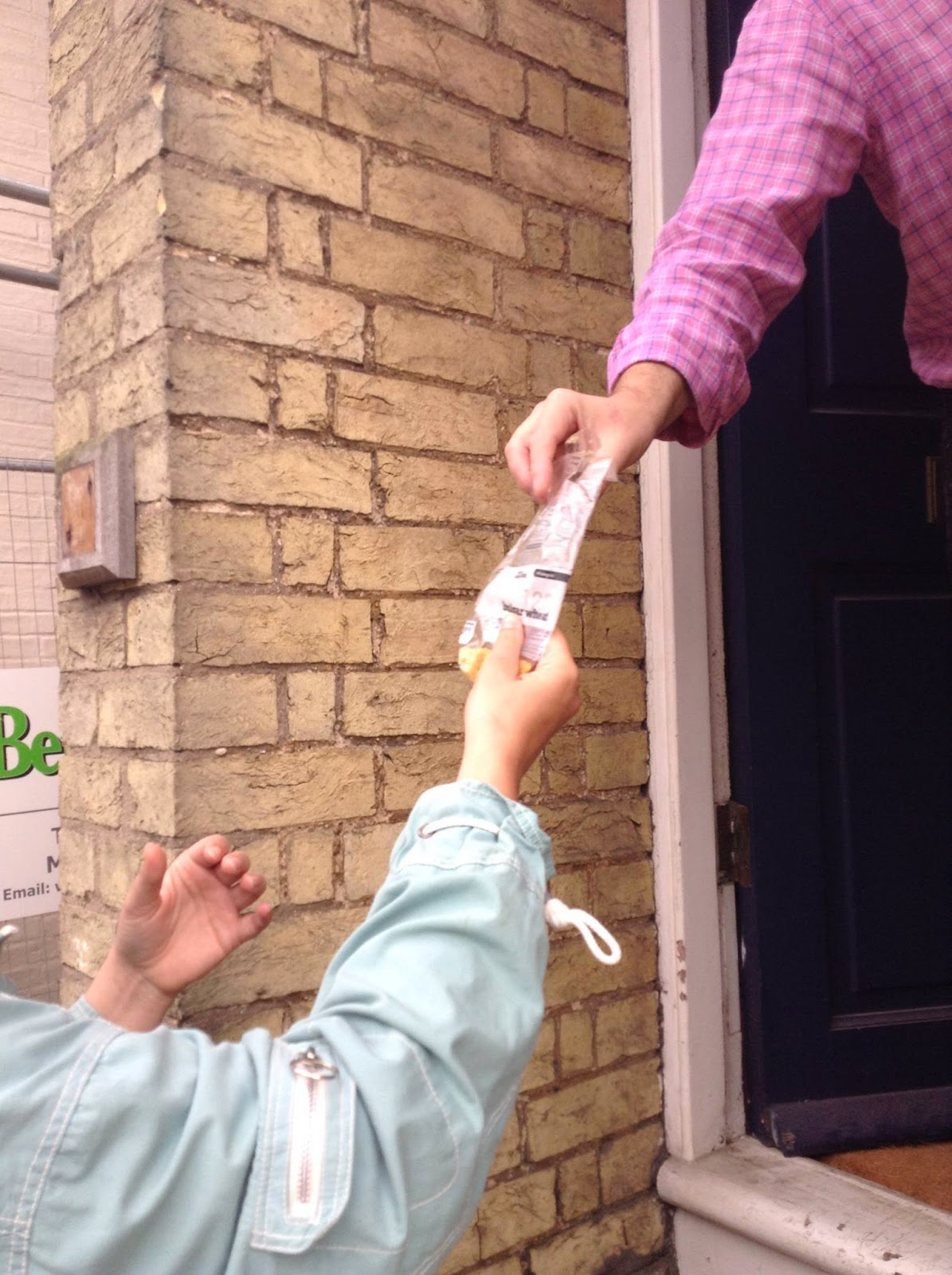 Quid Pro Quo
1. The mutual consideration that passes between two parties to a contractual agreement, thereby rendering the agreement valid.
2. In common usage, quid pro quo refers to the giving of one valuable thing for another. 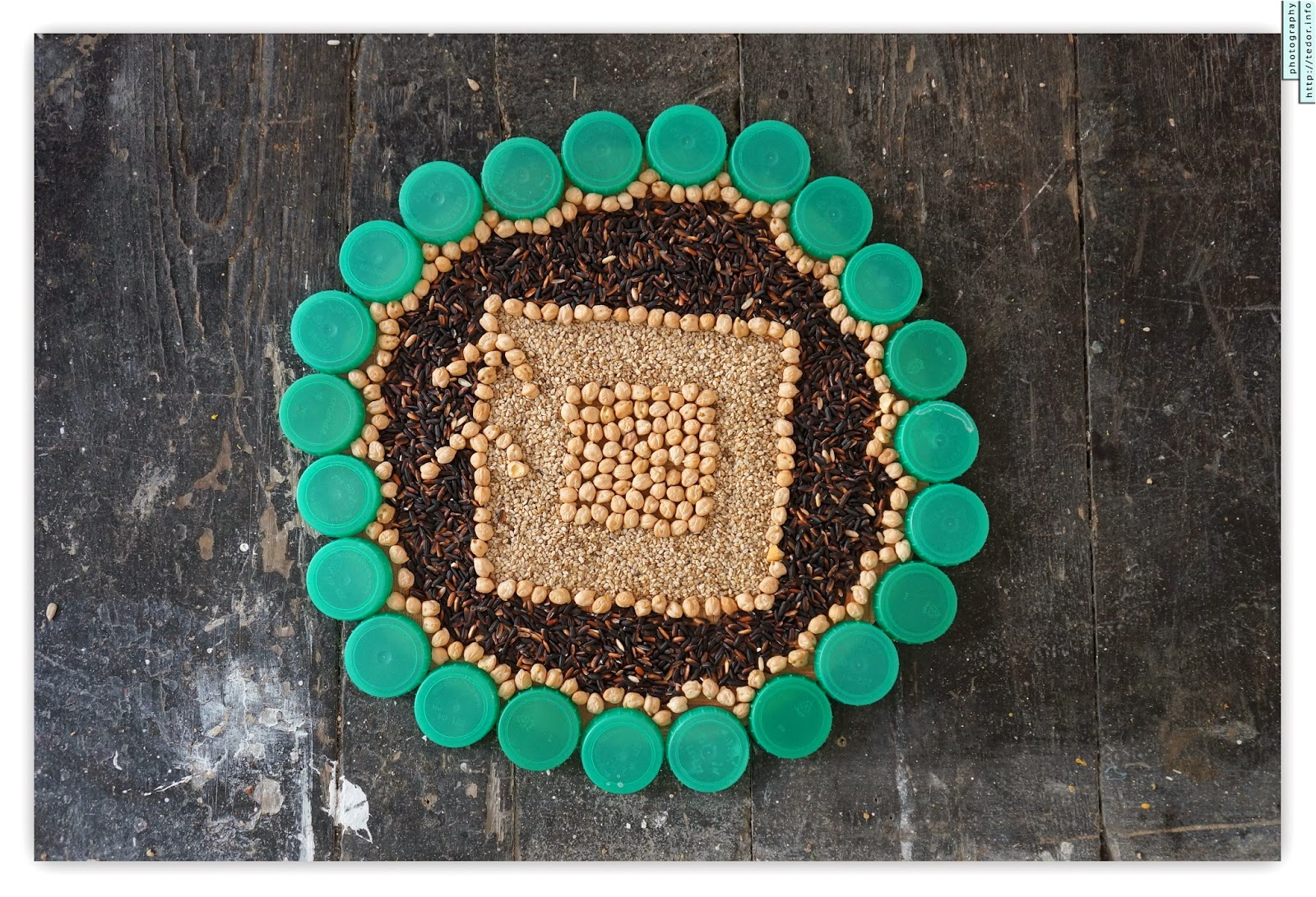 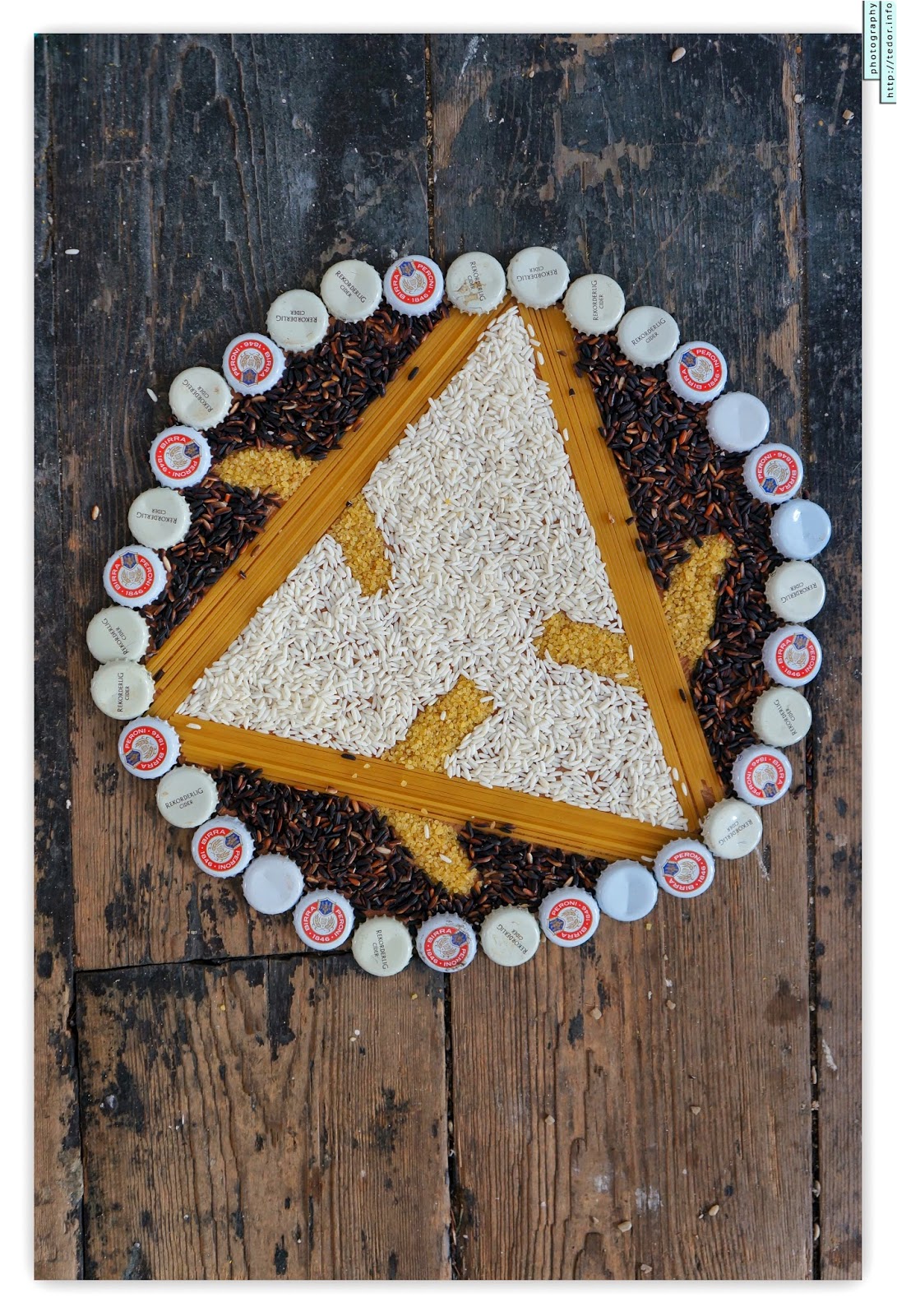 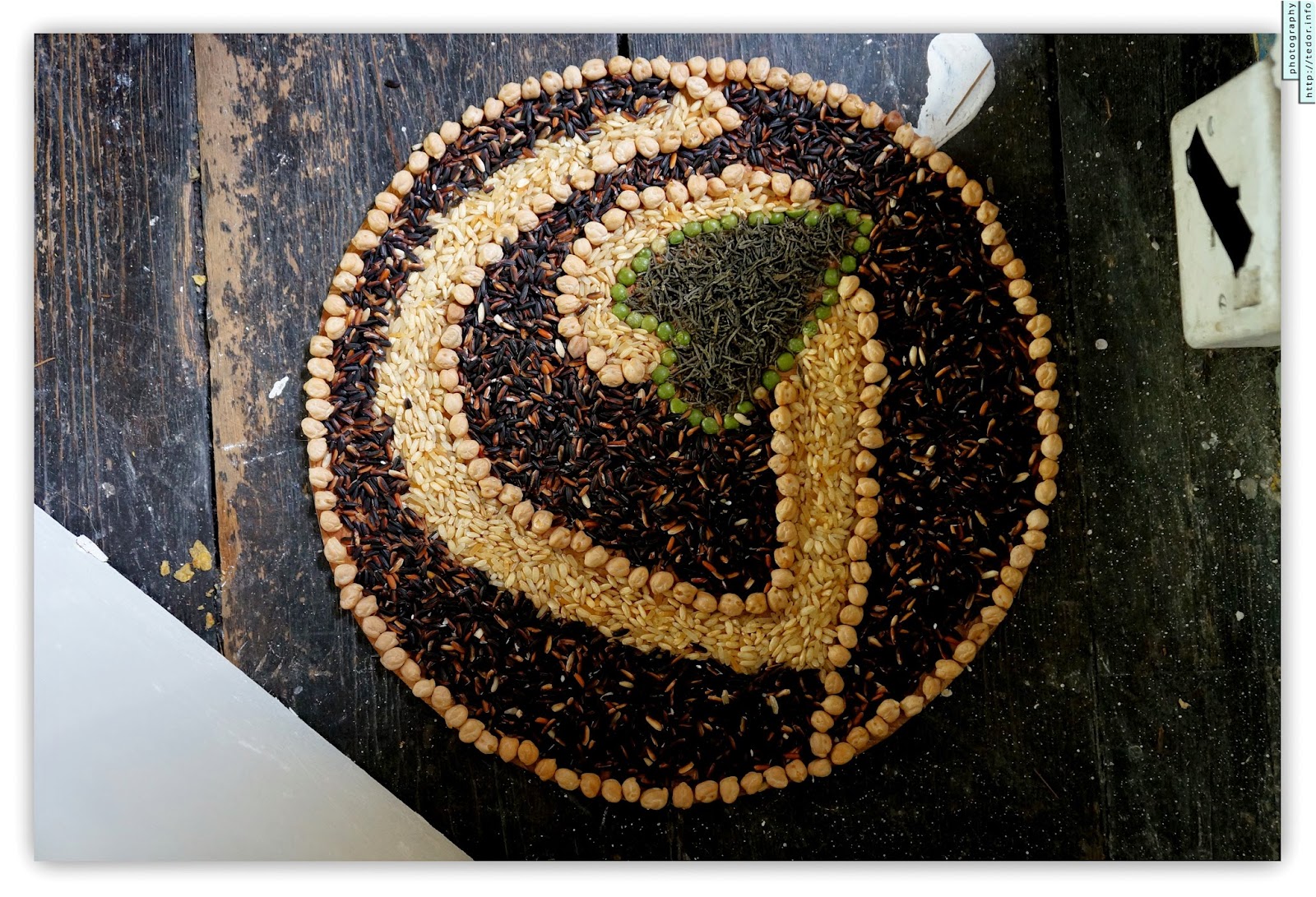 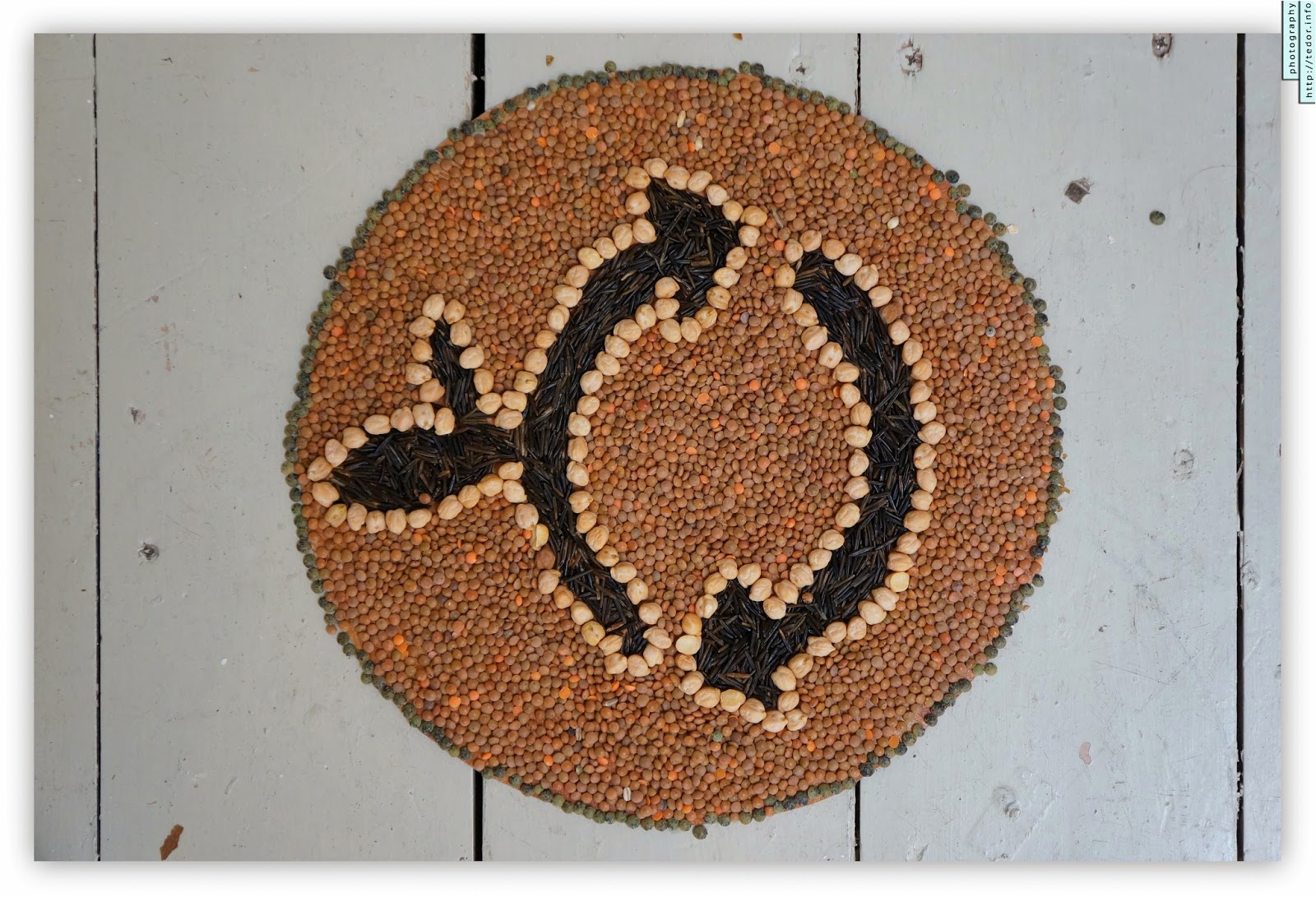 For the information booklet I wrote this text:
"Inspired by the Corpus Christi procession, held in Cambridge from 1352 to 1535. A parade through the streets from the Corpus Christi College to the Magdalene bridge. Rituals, like Corpus Christi, can mean different things to different people. In their construction of images of the world and in their incitement to action, processions can bear messages that are contradictory, volatile, and determined by context."

I made my little carpets on different places in the gallery. I based the patterns on symbols we use for re-use, recycle & reduce on packaging. I tried to match them with the works in the space. The symbol for reduce of water with Krisztian Hofstadter work, that was about how much water is being used to produce milk, and symbols for biological and vegetarian products with the sourdough project by Pía Galvez, Valerie Furnham & Emma James.

The response to my work was overwhelming and I got a lot of questions during the opening. The respons was even more intense when someone stepped into one of the carpets. I didn't see it happen, I was in another part of the space, but I loved hearing everyone's version of how it happened!
The temporary state of the work was to my surprise the thing that really made everyone think. Of course this is an important part of my work, but for me there are more layers to it.
The next morning I remade the carpet and we had a review of the exhibition. During the silent critique a nice connection between Sustainability and my ricecarpets was made.
You had to be careful where you stand in the space and that you were constantly aware of the vulnerability of the work. Watching if people didn't stand to close to it, placing your feet with care. It made you think about nature and the environment, that you such be more careful with these vulnerable things. 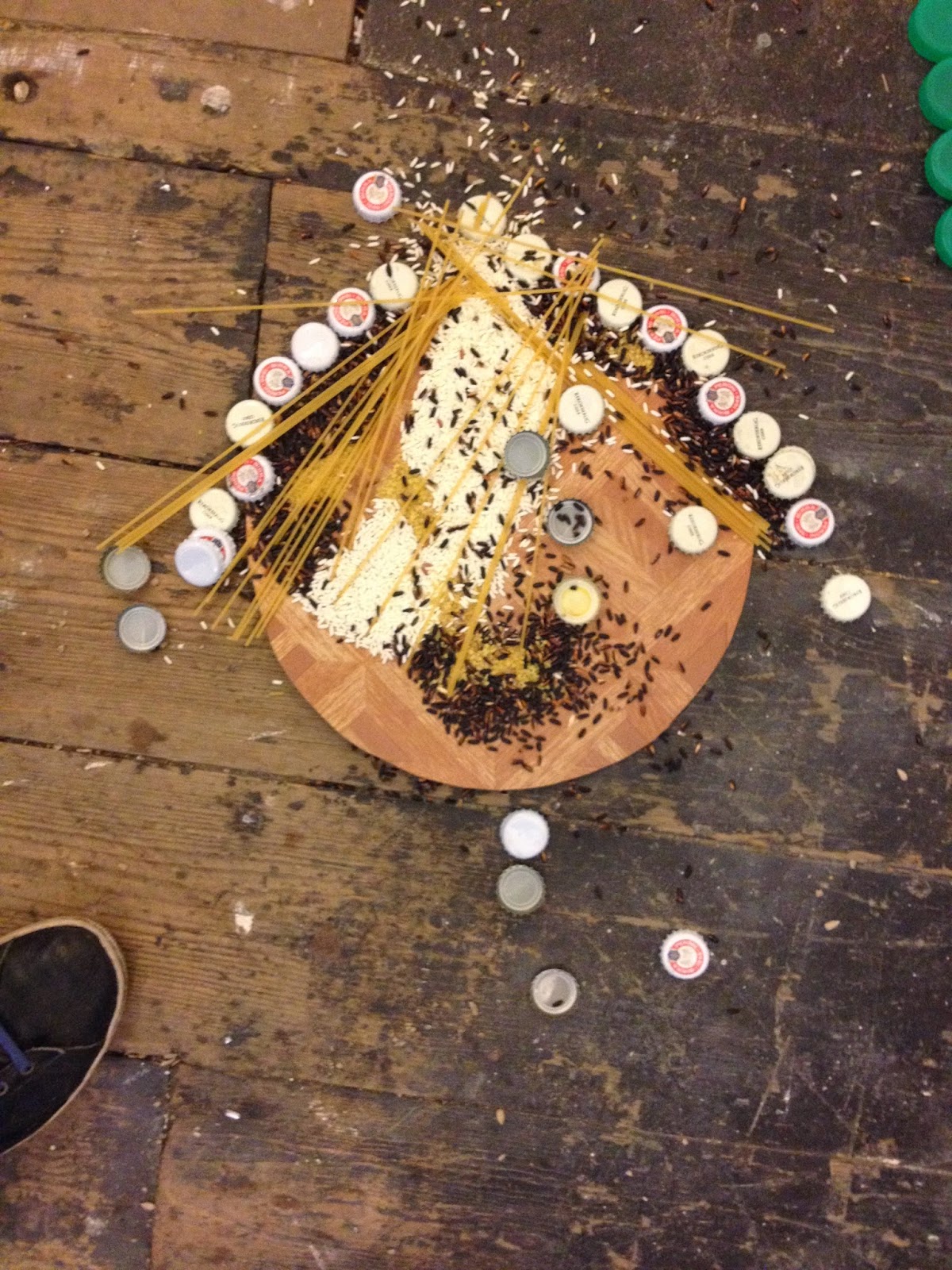 More about the Cambridge Sustainability Residency on www.cambridgesustainabilityresidency.com

Online review of the exhibition on www.beatrizacevedoart.wordpress.com